Apparently today is World Card Making Day!! So I decided to make a card - or two, or twenty five. I'm working on a card order so I'm in mass production mode, but I did manage to come up with something original. I'd been wanting to try a criss-cross card ever since I saw the tutorial on SCS, so I finally made it happen. The paper is from the MME Costco stack and the stamp is from the $1 bin at Michaels. I coloured the pumpkins with my prismas and gamsol. I've been so productive so I have lots to show you - a name frame and some treat containers to name a few! See you later!
Posted by Kerry Johnson at 21:12

That is a wonderful $1 find!!! You turned it into such a great card!

When you sew onto your cards, are you sewing right onto the card front or onto a separate sheet that is then glued onto the front? For example, do you see the underside sewing on the inside of the card front?

Thnx
*wink* could not get a hold of you real world.

Kerry Johnson
I'm a stay at home mom to two beautiful children and I have a passion for rubber stamping and cardmaking. I enjoy sharing my creations with my family and friends, and even sell some as well. Pull up a coffee and get comfortable - thanks for stopping by! 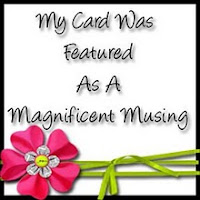